Art Auction Vocabulary: What To Know When Buying at Auction 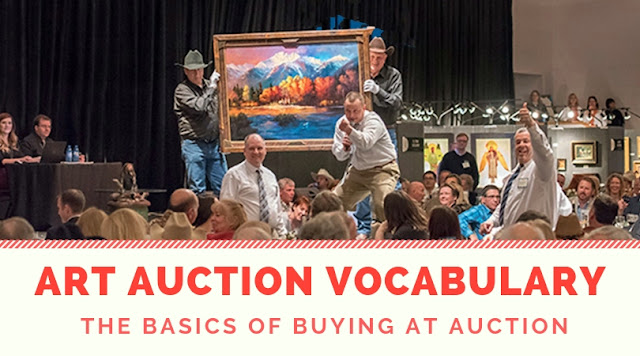 Everyone loves a good auction, especially a Western art auction.  The energy is kicked up a notch with the cattle calling and hootin' and hollerin' of the spotters.  The action is fast-paced with live bidding on the floor, absentee bidding, phone bidding, and now, increased online bidding.  Don't let the action or pace hold you back though, because buying at auction is relatively easy and there are plenty of opportunities for great deals.  Not only do art auctions make for great entertainment when there's a bidding war for a special painting a la Andy Thomas' "Charlie and His Characters", but they also set the mood for the art market as a whole.  Whether you're an experienced auction-goer or new to the bidding world, here's an introduction to common terms surrounding art auctions.

Auctioneer - The person with the mic and the gavel.  The emcee of the sale who controls the energy, pace and fate of each work in the auction.  Different auctioneers and their team have different styles and all try their best to inject their sense of humor.  We have terrific auctioneers in the Western genre with lots of experience.

Spotter - These are members of the Auctioneer's team that "spot" bidders in the crowd, and holler to let the auctioneer know they have the bid he's asking for.  When you're choosing your seat at an auction, know where your spotter is located, so your bids don't go unnoticed.

Hammer - Also known as a gavel, this is the auctioneer's primary tool next to their smooth buttery voices.  When you hear the bang of the hammer, it indicates the end of bidding and a sale. When you have the high bid, all you want is for the hammer to drop.

Auction Block - When an artwork goes up for auction it is considered to "go on the block."  Often times the artwork is showcased on stage while it's up for sale and also shown on large screens.

Paddle - Not the holed instrument Ben Affleck used to haze freshmen in Dazed and Confused, but a bidder's official weapon to bid on their favorite artwork.  It typically has the bidder's registered number and is used to signify an official bid. Bare in mind, that once a bidder has a spotter's attention by raising their paddle, a nod or other sign can be used to communicate with the spotter for proceeding bids.

Lot - This is the term used for each piece that goes up for sale, and auctions are organized in order of lot number. Most lots are typically a single piece of art, but can also be a group of works.  Lot numbers are also helpful in identifying when a targeted work hits the auction block.

Consignor - The person, estate, or institution that put a specific artwork up for auction, oftentimes as a result of one of the "three Ds": death, divorce, or debt.  You can also add a fourth "D" which is downsizing.  As a consignor, do your research on auction houses, because they're not all the same. They target different audiences, have different premiums, and of course, different reputations.

Estimate - This is the auction house's estimated range for what a piece of art could potentially sell for.  It comes from the auction house's specialists based on current market factors, and is shown in the auction catalogs along with the details of each work.  Pre-sale estimates are shown as low estimates to high estimates.  This does not directly represent what a work of art is worth, but rather a guestimate of what it might sell for based on previous sales of similar works by the same artist.

Reserve - The minimum price that a consignor will allow the auction house to sell an artwork for, meaning that if bidding fails to rise to the level of the reserve the work will be bought in or passed.  While the reserve is used to set a minimum sales figure, when a painting is bought in or passes, the value can drop as much as 30% because the artwork now carries a stigma of a no-sale.

Catalogue - This is the glossy, beautifully produced brochure that the auction house sends to collectors, dealers, and other interested parties to share what's for sale, the details of each work, the estimates, and professionally shot photographs of the art. They will also include all the details of the sale including date, time, and terms and conditions.  It's a major tool in creating awareness, maximizing exposure, and creating interest in all the works for sale.  Auction houses will spend large sums to produce these catalogues and they make for great reference material to include with works in your collection.  For collectors, it's like a kid getting a Toys "R" Us catalogue before Christmas...Does Toys R Us even exist anymore?

Cover Lot - This is the lot displayed on the cover of the catalogue, and it's generally the artwork that the house believes will generate the most excitement at auction.

Condition Reports - A report disclosing the condition of the artwork presented for sale.  Condition reports are vital when a buyer can't preview the work in person.  Don't be afraid to inquire about condition reports, because it's all apart of the due diligence when acquiring a valuable piece of art.  While it is normal for old paintings to have condition issues, it doesn't always affect the value, but it's important to at least know about it.  Occasionally, buying a painting that's not in perfect condition can be a great opportunity, because you may be able to acquire it at a discounted rate, then have it restored to look almost new.

Buyer's Premium - This is the surcharge that the auction house adds to the hammer price of each lot sold.  The buyer's premium varies from one auction house to another, but usually averages between 17% - 25%.  Auction reports most frequently cite the total prices, including the buyer's premium, and auction records include them as well.  It's important for buyer's to consider this premium when deciding what to bid compared to the final purchase price.

Bid - This is the price that's asked by the auctioneer and the bidder indicates that he or she is willing to pay for a particular work.  Bidders will signal with their bidder paddle, have a representative place it on the bidder's behalf, calling it in on the phone, or logging it online. Today, it's easier than ever to get involved and bid in auctions with the ability to bid online, by absentee bid, by telephone bid and even on your mobile devices.  However, there's no doubt that the most fun is attending the auction live and bidding on the floor.

Increment - This is the fixed amount bids will increase from the previous bid.  It does change depending on the value ranges.

Absentee Bid - A bid placed on a lot when an interested party cannot attend in person.  The absentee bid amount represents the maximum amount a buyer is willing to pay for an item plus the buyer's premium.  An absentee bid is treated like any other bid on the auction floor, so an absentee bidder may win a work of art without reaching the maximum absentee bid if there is not a competitive bidder.

Telephone Bid - A bid placed live, over the phone with a specialist from the auction house.  Ideal when a buyer cannot attend in person, but still wants to be involved during the live bidding.  The bidder will dictate over the phone whether they would like to bid or not, and the representative from the auction house will dictate the current bid to the buyer.  It's a great way to bid and be a part of the action without being present at the auction.

Hammer Price - This is the price of the winning bid when the auctioneer throws down the gavel.  The buyer's premium will be added to this price to make up the final sales price.  The seller's commission will also be deducted from this price to determine what the seller nets for their work of art.

Bought In or Pass - The term used when an artwork does not sell at auction.  Often times due to not making the minimum reserve to sell.  As a seller, try and avoid having your piece pass to avoid the stigma that goes along with a bought-in piece of art.  As a buyer, when an artwork is bought-in, don't hesitate to approach the auction house to make an offer.  Often times, good value can be had when purchasing an artwork after it passes.

Sell-Through Rate - This is the percentage of total works sold in a given auction.

Understanding the vocabulary of an art auction is just the beginning.  The real fun begins when you start bidding and win a painting!  Don't be afraid to get involved either.  Auction dates are set well in advance to allow auction houses to promote their sale and get as many people as possible to participate.  The artwork needs to be photographed, catalogues need to be printed and mailed, and adult beverages need to be organized for preview parties and the actual auction.  This allows collectors to preview works, research market values, review condition reports and measure the wall where the painting will hang.  Whatever your due diligence process is when adding a work of art to your collection, don't be afraid to reach out to me if you have questions or would like any assistance. I'm a great resource for researching sales history of an artist, verifying condition and a good representative if you need someone to bid for you. Auctions are great, because it's an open market so the collectors ultimately dictate the final price.
Email Post
Labels: Andy Thomas Art Auctions Auction Charles Russell Christies Coeur d'Alene Art Auction Collecting Collection Factors Colt Idol Jackson Hole Art Auction March in Montana Scottsdale Art Auction Sothebys