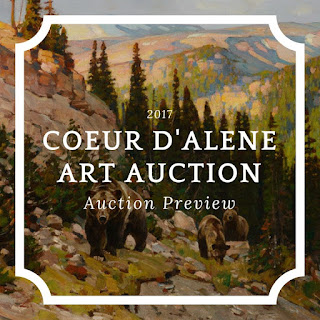 This weekend, major collectors will descend on the Grand Sierra Resort in Reno, NV to take part in what I consider the Super Bowl of Western Art Auctions.  The Grand Sierra Resort recently completed a major renovation and the luxury will mirror the quality of art in the annual Coeur d'Alene Art Auction.  You don't want to miss the preview party on Friday, July 28th from 6-8pm.  The lamb chops and gigantic shrimp are as well known as the artists featured in the sale.  The auction begins at 12pm on Saturday, July 29th featuring 324 terrific works that will have the bidding fast and furious from the beginning.  I've always advised people to pursue and acquire the best examples of an artist's work, and not to just chase the name.  There's always a market for quality works by established artists.  One of the biggest strengths of the CDA Art Auction is the overall quality from top to bottom.  "You don't just want any work from an artist.  You want some of the best work from that artist," says Mike Overby, auction partner for the CDA Art Auction.  "And that's what we always try to bring, year after year.  This year is no exception.  We're projecting to have a great sale with some major pieces ans some really strong offerings from top to bottom."


Let's turn our attention to other perceptions about the sale.  I've already mentioned the terrific opportunities of quality paintings estimated under $10,000 and a few I think worth following are John Fery's Glacier National Park measuring 18x14 inches and estimated $6,000-$9,000.  There are some humongous Fery works in the sale, which he was known to do for the Great Northern Railroad, but Glacier National Park is a little gem of a landscape and Fery has a strong following of collectors. Since Larry Len Peterson wrote the John Fery book, the secret is out and Fery's work may not be under-valued for too much longer.  I also noticed a slightly higher number of contemporary artists in the sale, or works by living artists.  Coeur d'Alene Art Auction has always featured some of the country's premier Western, wildlife and sporting artists and I think those artists who were invited to submit works this year have really put their best foot forward.  I love the drama and color palette of Luke Frazier's Caught in the Open estimated $20,000-$30,000 and measuring 30x48 inches.  I don't think I've had too many beers by saying Luke Frazier hikes the trail paved by terrific wildlife artists like Carl Rungius, Bob Kuhn, Tucker Smith and Ken Carlson.  I find it very impressive with how Andy Thomas continues to hit auction records out of the park for his action-packed cowboy scenes, and his painting Tornado Alley has all the elements you want in an Andy Thomas painting: action, movement, smoking guns and even the fleeing chickens!  It will be fun to see how Andy follows up his $216,000 auction record at The Russell in Great Falls, MT.

You may have seen me in the July issue of Western Art Collector in their Coast to Coast feature.  I talked about value, and I don't think there's a better value for contemporary artists than Michael Dudash and Don Oelze.  They're two uber-talented artists who are selling everything they paint and it's tough to find better quality works for the price than these two.  Check out Dudash's The Perfect Shot, 40x42 inches, oil on canvas, estimated $20,000-$30,000 and Don Oelze's Apache Strategy, 38x44 inches, oil on canvas, estimated $12,000-$18,000.  Finally, there's an artist I think is bursting onto the scene with his painterly style that's reminiscent of the Taos Founders, but with a contemporary twist and his name is Michael Cassidy.  His painting The Four Chiefs is the best I've seen him do and what was it that Mike Overby said?  The Four Chiefs is 48x60 inches, oil on canvas with a gold leaf background that grabs your attention and it's estimated $15,000-$25,000.

It would be remiss of me if I didn't mention one of my personal favorite artists, Carl Rungius. Although Rungius can bring big prices for major works, his world record is just shy of $1 million.  I know of private sales that have fetched over a million dollars, and it's just a matter of time before his world auction record exceeds the million dollar mark.  There's no arguing his influence on the North American big game wildlife art market.  What C.M. Russell is to Western art, Carl Rungius is to wildlife art.  Out of the Canyon by Carl Rungius measuring 28x36 inches and estimated $300,000-$500,000 is absolutely as good as it gets for a work by Rungius.  He liked it so much, he made an etching of the painting.  Rungius' confident brush strokes are evident throughout the painting, but I love how Rungius captured the shadow in the foreground and the sunlight off in the distance.  As the bears climb out of the canyon, the elevation is accented by where the sun and shadow meet on the rock in the top left side of the composition.  It's such a great painting!  As a collector, you have to love that it's truly "fresh-to-the-market."  William Read, and avid sportsman and early patron of Rungius in New York, purchased the painting directly from the artist, and it's been passed down through the family until now.  Opportunities for works like this don't come around very often.

One last tidbit, you can thank me later...check out In His Prime by Carl Rungius.  Talk about a gem! It's only 16x20 inches, but a fantastic painting with vibrant colors and one of Rungius' favorite subject matters.  Not only will this painting not cost you a million dollars for a "10", (maybe it will) but the provenance is as good as it gets too.  Joseph Barr, the original owner, built Rockefeller Center and was a member of the Salmagundi Club at the same time as Rungius.  It was passed down through Barr's family until it somehow landed in Bob Drummond's hands.  There isn't a better eye, especially with Rungius' work, than Bob Drummond's.  I may not know what I'm talking about, but I can assure you if Drummond thinks it's worthy for his collection, then it's worthy to add to yours.

Of course, there are plenty of terrific works by Taos Founders, and there's always a nice selection of Alaskan artists, but I can't cover everything.  Instead, come to the auction and enjoy the event!  If you're planning on attending the auction this weekend, I hope to see you there!  Please don't hesitate to introduce yourself if you see me and tell me how bored you get reading my blog, or even better, how much you enjoy the blog.  Good luck bidding!!
Email Post
Labels: Andy Thomas Bob Kuhn Carl Rungius Charles Russell Coeur d'Alene Art Auction Don Oelze John Fery Luke Frazier Michael Cassidy Michael Dudash Thomas Moran Western Art Collector William Leigh