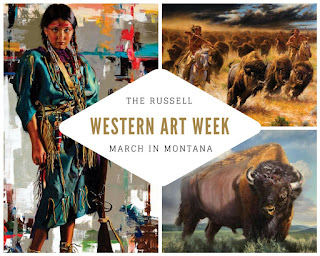 Western Art Week in Great Falls, MT in March is arguably one of the best weekends of Western art in the country.  Regardless of how people may feel about Great Falls in the middle of March, the sheer volume of events, number of artists, and visitors from all over the country always makes it a memorable weekend.  The main event is the C.M. Russell Museum's "The Russell Auction" and corresponding events the museum hosts like the Art in Action and preview party held at the museum.  Another favorite event of Western Art Week is the March in Montana Auction held at the Elks Lodge.  March in Montana always draws a nice crowd, the energy is always upbeat, and while there are only a handful of exhibitors, they're as good as they get.  The exhibitors include the Coeur d'Alene Art Auction, Settlers West Gallery, Manitou Galleries, Tierney Fine Art and the Coeur d'Alene Galleries.  There's no doubt that collectors can count on finding quality works from both deceased and contemporary artists from this terrific group of exhibitors.  Another big draw is the Out West Show at the Heritage Inn which presents over 100 exhibit rooms filled with artists and galleries from all over the country.  If the Out West Show doesn't overwhelm you with Western art, then maybe the show at the Holiday Inn or the design show at the Fairgrounds will put you in art overload.  There's something for everyone including weavings, guns, artifacts, cowboy collectibles, beading, and of course original art.

2018 marks the 50th auction for the C.M. Russell Museum in Great Falls, MT.  "The Russell" is as significant a museum show as the Prix de West at the National Cowboy Hall of Fame or the Masters of the American West at the Autry Museum or the Quest for the West show at the Eiteljorg Museum.  The Russell's format is unique in that it's a live auction, while other museums sell their paintings by fixed-price draw.  The ultimate goal for all the events are to raise money for the institutions, promote Western art, and expose the best Western artists and their work to the loyal patrons of the various institutions.  The C.M. Russell Museum rolled to $5.1 million in total sales from all their events.  The Saturday night live auction realized $4.6 million in sales highlighted by Charles Russell's "Buffalo Hunt, No. 7" a 22 x 34 inch oil painting that fetched $1,425,000.  Other highlights included Western Art Collector's cover piece "Just as Everything is Turning Black, I Hear Bed Rock's Winchester" selling for $222,300 and Jennifer Johnson's "The Great American Wild West" estimated $10,000-$16,000 sold for $23,400.  Chad Poppleton had a nice night after his piece "The Vision: Charles Marion Russell" sold for $35,100.  I know he was nervous because Chad's painting was a departure from his wildlife work that he traditionally paints.  Chad really nailed the painting and the collectors responded accordingly.  A few other artists that continue to sell really well include Michael Dudash, Brent Cotton, and Andy Thomas.  They're paintings in the auction all realized solid prices and the consistency in the quality of their work is being rewarded with red dots.


Not that anyone cares what I think, except for the 4 people who read my blog, I thought the best painting in the auction was by Don Oelze titled "The Days of Thunder" and it sold for an artist record of $35,100 with an original estimate of $11,000-$14,000.  I've followed Don's work for years, and he continues to progress and he just keeps getting better.  His work is one of the best values on the market today when you take into consideration quality and price point.  One of the most exciting moments of the auction was when Jeremy Winborg's "High Caliber" or "Little Ass Kicker" sold for $52,650 after having an original estimate of $7,000-$9,000.  There was a buzz all weekend about Jeremy Winborg's work, and it all culminated in a bidding war for his painting in the auction.  This is the type of collection factor that every artist hopes will happen to them, and it couldn't have happened to a nicer person than Jeremy.

2018 marks the 31st annual auction for March in Montana, and it didn't disappoint with an auction total of approximately $1.8 million.  The sale was exactly what you would expect from the longstanding auction.  A diverse selection of quality original paintings and bronzes from deceased and living artists, cowboy collectibles, guns, weavings, Indian artifacts, and saddles.  The variety of offerings is one of the biggest draws to the auction along with the warm friendly environment and potential to find great values throughout the sale.  A few highlights from March in Montana include W.H.D. Koerner's "Squaw Woman" realizing $41,300 with a $20,000-$30,000 estimate and Philip Goodwin's "Two Men in a Boat" sold for $53,100.  Andy Thomas' "Blackfeet Phantoms" realized $39,330 for a 24x36 inch oil painting.  There will be big shoes to fill in 2019 as Coeur d'Alene Galleries as acquired Manitou Galleries' interest in the March in Montana Auction.  Bob and Charla Nelson have done a masterful job for decades in putting together the March in Montana Auction, and now they pass the baton to Coeur d'Alene Galleries; who will be partners along with the Coeur d'Alene Art Auction in presenting the 2019 March in Montana Auction.

I want to wrap up Western Art Week with a few thoughts of my own from my experience in Great Falls.  First, the sum of all the events throughout Great Falls makes Western Art Week the attraction that it is.  Don't get me wrong, the C.M. Russell Museum and The Russell Auction is the foundation for the weekend; however, March in Montana, Out West Art Show, Wild Bunch Art Show, Jay Contway and Friends Art Show, and The Great Western Living & Design Show all contribute to make it worthwhile to travel to Great Falls, MT.  Next, the old adage of "quality sells" definitely applies again to Western Art Week.  Whether works of art were in the Russell Auction, Out West Show or at the Elks Lodge with March in Montana, there's always a demand for quality works.  Regardless of the quantity of available works, good quality paintings still sold well.  As I always tell collectors, buy the 8, 9, and 10's of a particular artist and you'll never regret it.  Finally, as I mentioned earlier, The Russell is a fantastic event that supports the C.M. Russell Museum and I think it's as important as any other museum show in the country.  The C.M. Russell Museum attracts a large group of qualified and knowledgeable collectors, which creates a wonderful opportunity for all the artists that exhibit their works.  Whether the artists are in the exclusive Skull Society Artists of the museum, or they're showing at the Out West Show, wouldn't it make sense to put your best foot forward?  Of course, this doesn't apply to all artists, but I was surprised to see the number of older works by fantastic artists.  Are these old works how you want to represent yourself to a large qualified group of collectors who have travelled from all parts of the country?  More than ever, fresh to the market works have value, and collector's are seeking quality new works.  One of my favorite quotes from a respected art dealer is, "If you want to sell more paintings, then paint better paintings." I say at least paint new ones.  Overall, I think the Western art market is as strong as it's been since 2008, and the energy, optimism, and total sales from Western Art Week backs it up.  Mark your calendars for March 20-24, 2019 for next year's Western Art Week!