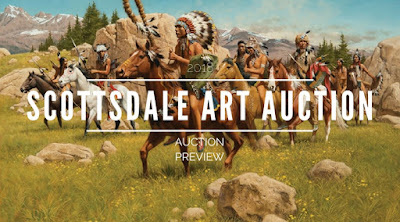 Saturday, April 7, 2018 marks the 14th annual Scottsdale Art Auction.  The timing seems perfect for a successful auction as collectors seem optimistic and in the mood to buy.  Western Art Week in Great Falls that included The Russell Auction and March in Montana Auction was a successful weekend where a lot of art changed hands, and the Night of Artists show that benefits the Briscoe Museum had a wildly successful event on March 25th.  I was interested to see what kind of sale the Scottsdale Art Auction was going to offer after their very successful Leanin Tree Museum Auction that realized $7.4 million in sales.  There's no doubt that people wanted a piece of the nostalgia surrounding the Leanin Tree Museum, because the prices were very strong.  I hate to say it, but I don't think this is one of Scottsdale's strongest sales.  Keep in mind that Scottsdale is coming off a very successful Leanin Tree Auction, and they've set the bar high for themselves because of quality sales in previous years.  Don't get me wrong, there are still plenty of great works being offered, but there are also a slew of works that have been to the open market recently, and I think collectors value fresh-to-the-market works.

The headliner pieces include a 20x30 inch oil by Thomas Moran titled "Solitude. The Coconino Forest, Arizona."  The pre-sale estimate is $400,000-$600,000, and based on Christie's recent American Art sale, the Moran market is very strong.  This Moran is fresh-to-the-market, which is what collectors are looking for today, so it could post a very strong number.  The cover piece is by an artist you may have heard of - Charles M. Russell.  Titled "Indian on Horseback" and measuring 13 3/4 x 10 1/2 inches, it's an earlier oil by the Cowboy artist dated 1898 and estimated $300,000-$500,000.  The provenance is fairly strong having been in the Amon Carter Museum's collection, and I noticed the Coeur d'Alene Art Auction sold it in 1997.  Just for shits and giggles, I pulled out my 1997 CDA Art Auction catalog and guess what the pre-sale estimate was for this same painting?........$40,000-$60,000!  I don't know about you, but I was surprised the estimate was that low.  There were other Russells in that same sale with estimates in the six figures.  Of course, it did sell well for $148,500 in 1997.  These numbers are a great reminder how far the American Western art market has come in the last two decades.  I've always said that the American Western art market is young compared to other genres, and has plenty of growth available for collectors to benefit from.

One of the best paintings in the sale is "Old Men on the Ram River" by Carl Rungius.  It's no secret that Rungius is one of my favorite artists, and given the significance of his role in ushering wildlife art into the mainstream in America, I've always believed his work is under-valued.  "Old Men on the Ram River" is 25 x 30 inches and estimated $250,000 - $350,000.  It's everything you want in a painting by Rungius, unless of course you want a different animal.  The confident and bold brush strokes hints at the creation of this painting being at Rungius' peak, and the composition leads your eye from the foreground to the background in nice diagonal lines.  This may not be the painting to do it, but we're not far from Rungius breaking the million dollar mark at auction.  I know it's already been done in private sales.

If you ever wanted to add a Kenneth Riley or Frank McCarthy to your collection, this sale might be a great time to do it.  Not only are there a number of works available by Riley and McCarthy in this sale, they are of excellent quality.  I'm always telling my clients to try and buy the best example of an artist's work.  There wasn't a more consistent artist than Frank McCarthy or a more popular CA artist than Kenneth Riley.  We recently lost a stalwart in the American Western art scene in Gerald Harvey Jones, who most know as G. Harvey.  His impressionistic style is as recognizable as the cowboys and trolley cars that he painted.  With seven works available, I have no doubt Harvey's market will continue to post strong numbers.  I've seen more and more George Carlson works come to the market, and I'm always blown away by how low his resale bronzes sell.  We're talking about one of the most respected American artists of our time who has works in museums all over the country.  The Denver Art Museum opened their new multi million dollar wing with a retrospective of us work, and his bronzes have been selling for a fraction of what they sold for when they were first released.  There are plenty of opportunities to add one of Carlson's bronzes to your collection in this year's Scottsdale Art Auction.

Overall, the partners of Scottsdale Art Auction always put on a great sale, and I have no doubt they'll post a strong number again in 2018.  I think this year's catalog proves that the auction world is as competitive as ever, which makes it tough to gather great material that's fresh to the market year in and year out.  Not only are the top end quality works rare, but I think there's a shift back to selling and buying works privately.  This accentuates my point about collector's giving value to fresh-to-the-market works that haven't been to auction.
Email Post
Labels: Art Auctions Carl Rungius Charles Russell Coeur d'Alene Art Auction Coeur d'Alene Galleries Frank McCarthy G. Harvey George Carlson Kenneth Riley Scottsdale Art Auction Thomas Moran