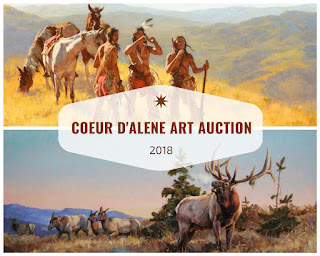 I don't make it a secret that this weekend is one of my favorites of the art year.  While I love going to Scottsdale to escape the cold north, and Jackson Hole is always gorgeous, the quality of art presented by the Coeur d'Alene Art Auction makes an art nerd like myself smile.  Then again, if you know me, it doesn't take much to make me smile.  Saturday, July 28th at Noon at the Grand Sierra Resort in Reno, NV, the 33rd annual Coeur d'Alene Art Auction kicks off, and all eyes in the Western art world will focus on Troy Black and the 322 lots being sold to the highest bidder.  There's a reason the Wall Street Journal says, "it's the nation's biggest and most successful auction of Western art."  Because I'm a sports nut, I like to call it the Super Bowl of Western art auctions.  The 2018 sale doesn't disappoint as Mike, Stu and Pete, the three partners of the Coeur d'Alene Art Auction, offer everything they've become known for over the years.  First, there's a terrific selection of rare historical works, tremendous quality across the board, there's the coveted 'fresh-to-the-market' works, signature paintings by today's leading contemporaries, and I have no doubt, there will be the signature lamb chops and humongous shrimp.

Let me begin with a few random thoughts.  There has to be something said about how major institutions across the country continue to trust the Coeur d'Alene Art Auction to deaccession works for them.  I think it speaks to the consistent quality of results Coeur d'Alene posts.  This year's sale will be highlighted by someone other than Russell.  Coeur d'Alene has always been known for offering up quality C.M. Russell works, but as the market goes, there just isn't the selection of Russell works compared to past years.  There really isn't as many in private hands as you might think.  With that being said, this year's sale will be dominated by big prices for Howard Terpning's and William Leigh's work.  The Terpnings that are being offered are exquisite, and Leigh's values have been steadily rising for a few years now.  I think the sleeper is the tremendous Henry Farny oil (lot #69) with an excellent provenance and rare size for a Farny.  I'm by no means a Farny expert, but I think that's as nice as you will find for a Henry Farny oil.  If you ever wanted a Sydney Laurence painting, this might be your year.  Lots of great works from arguably Alaska's most famous artist.  The same goes for Grace Carpenter Hudson.

The little O.C. Seltzer oil (lot #28) might be the finest little oil I've seen by Seltzer at that size.  If you wanted to add a really nice Seltzer to your collection, I wouldn't be afraid to bid aggressively for this little gem.  Speaking of small works, Howard Terpning's Cheyenne (lot #177) might be one of your last chance to grab a gem by the legendary artist for under $50,000.  If I had to bet a lamb chop on the over/under for that painting, I would go with the over.  Two Cheyenne warriors on horseback with vibrant colors...I'm telling you, it's not far off before you can't touch any of Terpning's work for under six figures.  It will probably sell for below the low estimate now that I've said that.  Regardless, it would still look great in my annual Miniatures by the Lake show!  What do you think Howard?  Can I get one for the 2019 Miniatures by the Lake show?

Alright, enough with my random thoughts that no one cares about.  When I think of the Coeur d'Alene Art Auction, I think of quality, fresh to the market works, and variety.  First, when I say quality, I don't just mean nice paintings.  I'm talking about quality examples by an artist within their own body of work.  We're not just collecting names, we want excellent examples of works when compared to other works within the artists' body of work.  Does the painting have all the signature elements that artist is known for regardless of size?  What's the provenance?  What museums has it been exhibited at?  Where has it been published?  Yes, I'm talking collection factors.  The Coeur d'Alene Art Auction never ceases to amaze me how they continue to find quality works that are fresh-to-the-market.  That's a buzz word in the current art market. With everything being so transparent, and auction sales being posted online, dealers and collectors are adding a premium to fresh-to-the-market works that haven't been shopped around or been to auction numerous times.  No one wants everyone else to know what they paid for a painting.  Yes, they're going to auction now, but you have to admit it's impressive how many works have either never been to auction or haven't been to auction in the last couple years.  Alfred Jacob Miller's The Thirsty Trapper is a good example.  It's 24x20 inches, oil on canvas and estimated $1,500,000-$2,500,000.  It's beautiful, rare, and has the potential to break a world record for the artist.  Another artist besides C.M. Russell that the Coeur d'Alene Art Auction consistently offers quality works by is Maynard Dixon.  They always have a few gems by Dixon and this year's no different.

The Taos Founders market has steadily recovered, and I know everyone is opinionated about what a quality work is from one of the founders, but I feel like there are some really nice E.I. Couse and Joseph Sharp works offered this year.  Speaking of which, take a look at the Couse-Sharp Historic Site.  Davison Koenig is doing great work to get the word out and promote this incredible project.  My babbling won't do it justice, so check out their website and consider supporting it.  Finally, you can rely on the Coeur d'Alene to always have an excellent variety of Western, wildlife and sporting art.  I've always felt that sporting art is really under-valued and it can't seem to break through this imaginary ceiling collectors have put on it; however, there's always a nice sample of quality sporting paintings from the likes of Philip Goodwin, Frank Stick, Frank Hoffman, Ogden Pleissner, and many more.  There's just something nostalgic about good sporting art.

I'm about four shots of espresso in now, and I'm beginning to bounce of the walls, but I would be remiss not to mention the fantastic contemporary artists that are being featured in the auction.  Consider it the next generation or two of collectible Western artists.  You'll recognize the works painted specifically for this sale by the 2018 date next to the titles.  The partners of this auction don't just invite anyone to submit works, they're very discerning, but I think with their experience, that only benefits the collectors.  There are a few first time artists in the auction that are worth mentioning, because I think it's a sign of the evolution of Western art and the tastes of younger collectors.  I'm sure you've heard of Mark Maggiori at this point, but it is his first time in the auction and he didn't disappoint.  I can still remember Mark's first few Western paintings (because I acquired them), and it's been fun to see his growth and progression.  Not to mention his meteoric rise.  If anything, Mark's done a tremendous job of watching his output of major works, even though the demand for his work is through the roof.  When I think of value, I think of getting quality for a good price.  I think C. Michael Dudash is one of the most talented artists in the Western market.  He's a throwback to the age of illustrators, which essentially doesn't exist anymore since that industry has changed so much.  His prices aren't even close to his potential when you consider he's one of the few artists who can really tell a story with a complex, multi-figure narrative painting.  Michael's not only a tremendous artist, but an amazing person.  It's nice to see him finally get the attention he deserves.  Of course, there are other incredible artists that have been invited to participate in this auction including Luke Frazier, who's been a staple for years now and is as consistent a wildlife artist as you will find in the market today.  Brent Cotton has always been one of my personal favorites, because his style is unique, his subject matter speaks to me, and I love his expert control of color.  Just take a close look at the water in his painting and his subtle control of color if you see it in person.  If you want to talk about someone who has burst onto the scene, look no further than Jeremy Winborg.  The juxtaposition of his detailed, beautiful figures and abstract backgrounds have really been striking a chord with collectors.  It was a lot of fun watching his painting Little Ass Kicker sell for $52,650 in March at the annual C.M. Russell Museum's auction in Great Falls.  Another crowd favorite in Great Falls is Andy Thomas.  He's not sneaking up on anyone, but he's still one of the leading painters when it comes to action and historical figurative works.  I can't mention all the great contemporary artists in the sale, but the last one I would like to direct your attention to is Don Oelze.  He just continues to get better and better and because he's working with a few more galleries now, he's getting the attention his work deserves.

If you plan on attending The Coeur d'Alene Art Auction, I hope to see you there.  Don't be afraid to introduce yourself and tell me how wrong I am about everything I've just written, or how you like the one post I do a year.  I will be doing a series of blog posts on how to begin collecting art and a series about buying and selling at auction.  I get so many people who ask me how I got into the business, but more importantly, where do they begin if they want to start collecting art. Naturally, my advice is to read my blog, visit museums and art galleries on a regular basis, just to look at quality art and learn the artists.  I also highly recommend attending art auctions, because you don't need any direction when it comes to buying what you like, but if you want to collect art that potentially holds its value or if we're lucky appreciates, then you have to understand the actual market for art.  Go to quality galleries, museums and art auctions, look at as much art as you can to train your eye, and just follow along as the works sell.  It's the best place to start.  I'll see you on the craps table in Reno!